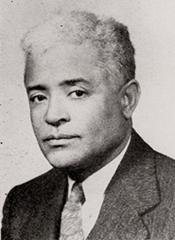 Luther Jackson School has a varied and unique history. It is presently a vibrant middle school located in the suburbs of Washington, D.C., our nation's capital, in Fairfax County, Virginia. Luther Porter Jackson High School opened in September 1954 as the high school for black students in Fairfax County. Prior to this time, black students attended high school in Washington,D.C. or were transported to the Industrial School of Manassas. When Fairfax County Public Schools (FCPS) integrated, the school re-opened as Luther Jackson Intermediate School in September 1965. Taylor M. Williams was the only principal of Luther Jackson High School and later served as Area I Superintendent. A showcase in the foyer proudly displays archival information of Luther Jackson, the school.

Dr. Luther P. Jackson, for whom the school was named, distinguished himself as a historian and an educator whose nationally recognized writings identified the contributions of African-Americans in Virginia's history. He headed the History Department at Virginia State College in Petersburg, provided leadership in the Virginia Teachers Association, organized the Association for the Study of Negro Life and History and established the Negro Voters League of Virginia. The N.A.A.C.P. recognized his efforts to enhance the voting rights of African-Americans in Virginia. He contributed numerous articles to the Norfolk Journal and Guide concerning the responsibilities of citizenship in a democracy. This scholar, man of action and model of character continues to be an inspiration to the community, staff and students of the school that proudly bears his name.

The school has been renovated and modernized several times during its history. From its original enrollment of 400 plus students, the school has steadily grown to today's student enrollment of more than 1400 students representing a multicultural population of 60 countries and 49 languages. The school has been recognized for its many achievements and friendly open atmosphere. During Spring 1996, it was selected for a visit from our First Lady, Hillary Rodham Clinton, who also chaired a televised Luther Jackson forum. In 1997, Luther Jackson was selected for national recognition as one of only five schools in the United States to receive the nationally recognized award of "School of Excellence" presented by the Hispanic Magazine and Ryder System, Inc. This included not only an attractive plaque, but also a visit and luncheon at the White House for several of our staff members. In addition, a number of our staff and students have been honored for excellence. Since February 1981, the Fairfax County School Board has called Luther Jackson "home". Members of the community recognize the school as "the place where the School Board meets."

Dr. Jackson would be proud of the school that bears his name. Today's students, faculty, staff, and community continue to be devoted and dedicated to the tradition and standards of excellence that he inspired.