A Note on Language

When you research the history of Fairfax County Public Schools (FCPS) during the period of 1870 to 1970, you will invariably encounter racially-charged language that is archaic and often problematic by modern standards. In particular, the primary source documents from the period use the terms “Colored” and “Negro” to commonly describe students and schools. In the following text, these words have been italicized to indicate they are being used in the historically correct context.

The Public Free Schools of Virginia

In March 1948, a delegation of African-American residents of Fairfax County addressed the School Board and presented a resolution which expressed in detail the community’s desire that a high school for African-American children be constructed in Fairfax County. A transcript of the resolution can be found on our sources page. In October 1948, FCPS Superintendent W. T. Woodson presented the School Board with a list of new schools he felt would need to be constructed in Fairfax County in the near future. Superintendent Woodson’s list included the construction of a new high school for African-American children within five to ten years at an estimated cost of $700,000.

In June 1945 there were 8,235 children enrolled in Fairfax County Public Schools (FCPS) at 42 schools. By June 1949 enrollment had increased to 12,118 children, but there were still only 42 schools in operation. A school bond referendum was held on May 30, 1950, and Fairfax County voters, by a margin of 2-1, approved $10.5 million in emergency school construction. However, the sale of the bonds was held up for one year due to a lawsuit contesting the validity of the bond issue. The lawsuit delayed the desperately-needed construction of 18 new schools and additions to 20 schools.

The search for a location for the new high school began in November 1949. Sites along Shreve Road near Falls Church, Route 236 at Woodburn Road, and in Fairfax near present day George Mason University were considered, but ultimately a site in Merrifield on Gallows Road was chosen. In August 1951, with the assistance of the Tinner family of Falls Church, the School Board entered into an agreement to purchase 14.4 acres of land from Ottomarius Enid Stone Faison. An additional 6.5 acres of land was acquired from the Seoane family in February 1952.

In October 1951, the School Board assigned architect Earl B. Bailey to design the new high school at Merrifield. The Board later directed Bailey to include in his plans an elementary school wing to house students.

The contract for the construction of the Merrifield Negro High School, as it was known at the time, was awarded on December 18, 1952, to Eugene Simpson & Brother of Alexandria, Virginia.

The naming process for the high school at Merrifield began in July 1953. Two names were suggested early in the process: William A. West (a former FCPS teacher and resident of Vienna, Virginia who helped found the Fairfax County chapter of the N.A.A.C.P.) and Dr. Luther Porter Jackson. The majority of the community favored the name Luther P. Jackson, and the School Board officially named the school for him on December 1, 1953. In April 1954, Mr. Taylor M. Williams was appointed principal of Luther Jackson High School.

Luther Jackson High School opened on September 1, 1954. The school’s dedication ceremony was held on Sunday, April 17, 1955. The dedication program can be seen in the slideshow below. 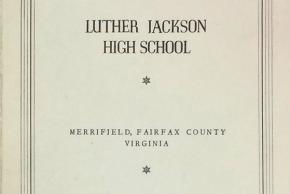 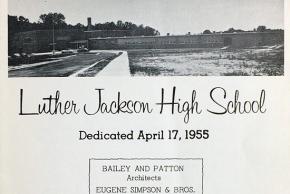 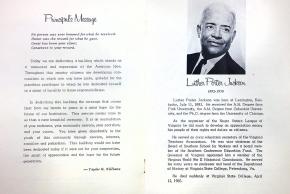 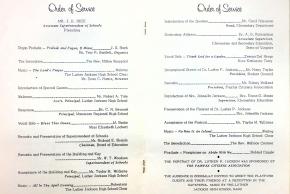 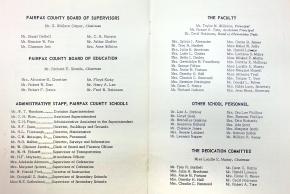 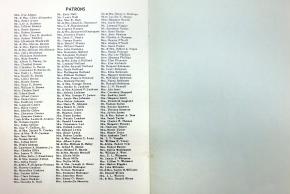 In this video, alumni of Luther Jackson High School share their fond memories of the school. 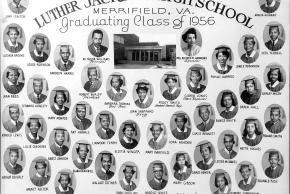 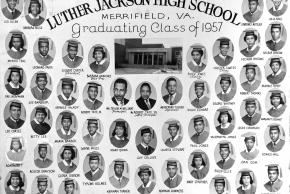 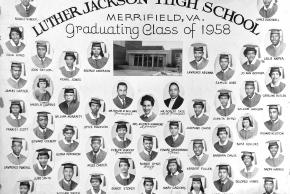 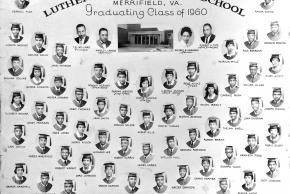 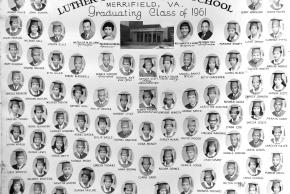 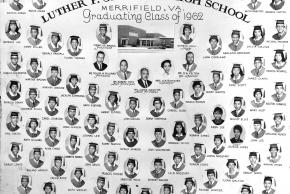 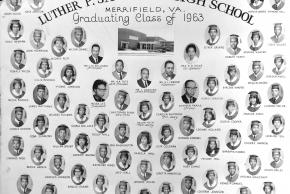 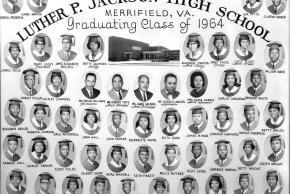 The racial desegregation of the public schools of Fairfax County was achieved by the closing of the all-African-American schools and the busing of the children to formerly all-white schools. Beginning in 1960, African-American students were slowly admitted to white schools through a pupil placement application process. During the 1964-65 school year, under continued legal pressure in Federal District Court, the School Board and FCPS Superintendent Funderburk drafted a plan to speed up the integration process. Due to the relatively small size of Luther Jackson High School, the School Board stated that it was “not feasible or practical” to enlarge the building to the 2,000-student capacity required for county high schools and was better suited for use as an intermediate school. For a brief period of time, the School Board considered renaming the building Carl Sandburg Intermediate School, but this never came to pass because the community wished to see the name Luther Jackson retained. Luther Jackson High School closed in June 1965. The building reopened the following September as Luther Jackson Intermediate School.

Learn more about the desegregation of Fairfax County Public Schools.